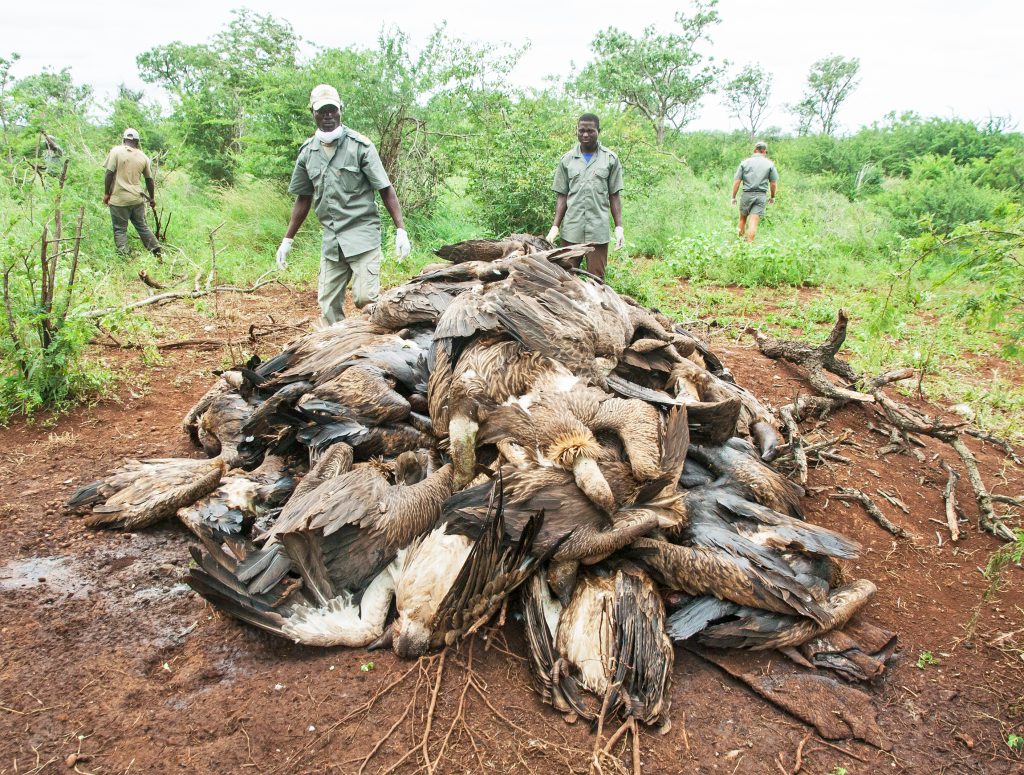 At least 104 vultures of endangered species, of which 80 are white-footed (Gyps africanus) and 17 hooded (Necrosyrtes monachus), were deliberately poisoned last Saturday, February 24, in Mbashene, Moamba District , Maputo Province, by a 62-year-old citizen of Magude who is named after Nelson Palate Machel.
In order to achieve his attempts, the citizen in question used an extremely powerful poison in an elephant carcass where the birds lay, which are ecologically responsible for cleaning animal corpses.
The author confessed, was captured by the Natural Resources and Environment Protection Police (PPRMNA) the following day, in the village of Tombine-Sabié in Moamba, and taken to the District Command, for the investigation of the crime case.
At the time of his arrest, Nelson Palate Machel was in possession of two ivory tips and a vial containing the alleged poison, but denied involvement in the death of the three elephants found on the scene.
Some of the birds were mutilated, suggesting the search for organ parts for obscurantist practices, but the reasons for this poisoning, which is not the first in the area, are still being investigated.
What is known is that vultures are deliberately poisoned so as not to alert the authorities to the presence of carcasses resulting from poaching and to such obscurantist practices.
This incident draws attention to the growing threat of the use of poisons to kill wildlife, and in this case the vultures, which have already suffered a sharp decline of more than 80 percent over the last 30 years, are a vulnerable species, due to their eating habits in dead animal corpses.
The incident was reported by the operator of the Incomati Conservancy, Dries Gows, to the National Administration of Conservation Areas, which was mobilized by Mapper Province PPRMNA, Wildlife Vet, João Simões de Almeida from Sabié Game Park and the A veterinarian at Kruger National Park, Louis Van Schalkwyk, to reinforce the supply of the antidote to save 17 birds that were still alive. Also involved were Andre Botha of the Endangered Wildlife Trust (EWT) and Piet Kok who also assisted in the recovery of birds.

« Since 17th of July a total of 1524 animals of different species have been relocated to Maputo Special Reserve (REM), namely 450 impalas, 281 zebras, 131 gnus (wildebeests), 50 kudos, 251 nyalas and 361 waterbucks.
Director General of ANAC defends the involvement of communities in the management of natural resources »